After experimenting with electronic music for a while I've come back to my guitar with a newfound interest in hardware effects specifically. I'd like to start building my own effects and was wondering if you guys knew of any good sites I should be checking out...sites with lots of articles and schematics are always nice but I'd particularly like to find someplace that has an active user community where ideas can be bounced around. After spending a few years kind of "away" from guitar (i.e. playing once in a while when the mood strikes but aside from that not really even looking at it) and working more with software synths and overall production I feel like for guitarists in particular there aren't a lot of options for people who want to experiment unless you've got an electrical engineering degree and all the required doodads for programming and flashing your own IC chips. I would really like to eventually develop some kind of intuitive, low-cost guitar synth that has lots of features but isn't super intimidating to figure out and doesn't require either a proprietary instrument or a MIDI pickup.

Also, do places still exist where you can get things like "grab bags" of a bunch of random mixed electronic components for dirt-cheap? Those were pretty much the best things ever.

Had a vivid dream last night. We were performing together on stage...you had your flute, I had a keytar. Sounds incredibly stupid and awesome, right?

I don't know where this is coming from, but I know it's exactly what I want and I'm not afraid of failure anymore. I really don't want to put words in your mouth and it sounds so selfish and narcissistic to say this but I can't help feeling like you want this too, even with the guilt it would bring. Am I wrong??

God I wish I could be there in person just to show you a glimpse of what things could be like; for you to see what it's like to go a full week with at least six hours of sleep a day. To come home to a nice meal and some unwinding time instead of a checklist of things that need to get done so you might possibly survive the rest of the day. I know it all sounds too good to be true but it really isn't; and I'm truly sorry for coming on so strong when it's probably not the most convenient of times, but I just feel like every day that passes is another added on to almost ten years I've wasted because you weren't in them - ten years you've spent soldiering on doing the best you could with what you had when you could've had so much more if I hadn't been such a coward years ago. I have a lot to make up for, I know...but these past few weeks I've practically been walking on water. I feel like I could do anything right now and I know exactly what I want to do with all that potential and who deserves it...it might be a rough start, but we've had obstacles in the way before, lost our way at times, and always ended up back on the same course. I really think we both deserve to win.

God damn it I love you more than I have cared for anything. Just saying it to myself has made getting through every day so much easier.

So yeah; I know you're "with" someone currently and breaking it off might make things pretty difficult and awkward especially since you guys live together, but that would just be a temporary thing...and let's be honest here, you've had much worse.

I don't think he's right for you. He's really not a bad guy at all, but you deserve more. I was telling Leah the story the other day and she mentioned that relationships like the one you're in are the hardest ones to end even when they should because of the guilt factor. He's nowhere near the ass Brandon was so of course you feel like he deserves better treatment; and yes, he does deserve better treatment than Brandon. However, that doesn't mean going ahead and sticking with him because "hey things will really be better this time, he's actually trying now." Isn't that how it went the last three times? Isn't that how you got roped back in with Brandon? I can't watch you go through that again. I hate seeing you settle just because you don't want to hurt him...it's admirable, but it's also incredibly unfair.

It's not your responsibility to take care of him. That's what I feel like you're doing; taking care of him because you feel guilty. That's not how a relationship should work. You help him out, prop him up and support him while you're doing all these other things that drain you and what are you getting in return? Where was he last night? Was serving drinks really so incredibly important that he had to drop everything and go? It's not like this is an isolated event either...it's been a consistent pattern and you know it. It's completely unfair that when he has a problem you're always there to help but when you're in trouble "oh really sorry babe I have plans they're really important can we do this later?"

I'm tired of watching you work yourself to the point of complete exhaustion and then instead of coming home for a few hours of relaxation you come home to more work that you shouldn't even be doing. When was the last time someone took the load off your shoulders? When was the last time someone even said "thanks Danielle, I really appreciate everything you're doing for me"? You deserve so much better. You deserve someone who will actually help you...and not just when it's easy and convenient to do so. You deserve to have everything you give out without hesitation reciprocated in kind. You deserve to be loved and supported and to not constantly feel like you need to be doing more and making up for everyone else's shortcomings so they can be happy. You deserve to be happy too.

I really can't wait for the day when you realize that. 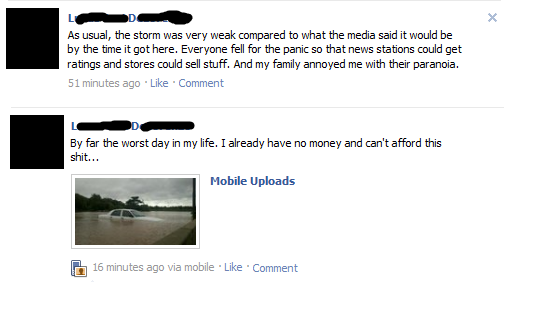 Available: 3 bedroom, 2 bath, with hot and cold running chills
Would you live in the perfect house or apartment rent-free if you found out a brutal murder had taken place there and it was rumored to be haunted? Why or why not?
Reply 1070
What kind of stupid idiot wouldn't take a free house?